Education as a Marketplace: What Entrepreneurs can Learn from Research on Pakistan’s Education Sector

In the fourth and final Video Conference for the academic year, Professor Asim Khwaja and Mariam Chughtai engaged in a lively discussion across sites in Pakistan and Bangladesh. Meena Hewett, SAI Executive Director, welcomed the participants and thanked the Aman Foundation, the Higher Education Commission and the Harvard Pakistan Student Group for their contributions during the year in enabling this new SAI series of Video Conferences across the South Asian region.
Mariam Chughtai presented her doctoral research on the politics of identity formation via the curriculum and then Professor Khwaja gave an overview of his research on Pakistan’s Education sector – he moved quickly to a thoroughly engaging discussion and Q&A session with the diverse audience making it clear at the start that many in the audience such as academics at the Aga Khan University’s Institute for Educational Development (AKU-IED) were incredibly informed participants so he wanted to engage in a genuine dialogue with them.
The questions and comments came from Video Conference sites across Pakistan and via an active Twitter feed. As one participant later shared thoughts on the value of the Video Conference, ‘The session was very informative and enlightening. Response to audience’s question was elaborative and I found it quite educative’, Muhammad Memon, The Hamid al Din al Kirmani Professor, AKU-IED.
We look forward to a new series of Video Conferences beginning in Fall 2013 and for enabling the presentation and wide sharing of research findings of Harvard academics across South Asia.

A recording of this event is available here. Sexual Assault and Gender Violence in South Asia: What Can We Learn from the Delhi Rape Incident? This event explored how the development partners can more effectively assist countries like Bangladesh in their leap into the middle income status. Also how to enhance the role of international community in this endeavor was discussed in the seminar.

To read a report from the event, click here. 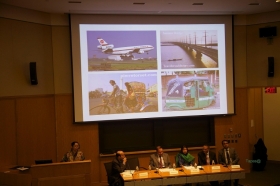 Najam Ahmed Shah, Additional Secretary in Government of Punjab, served as the Director/CEO of the Food Directorate prior to coming to USA on Eisenhower Fellowships* last month.

The Punjab Food Directorate is responsible for food security for 9 million people of Punjab and oversees the operations, finances, procurement, storage, and sale and export of millions of tons of wheat stocks. Mr. Shah will discuss the issue of food security in the Province of Punjab in Pakistan, and the issues he faced in connecting farmers to the marketplace. Mr. Shah will discuss issues around market failure and the arrangement of funds for procurement of wheat at support price, storage issues, post harvest losses, logistics, subsidies and flour prices. We will end the discussion with a Q&A session where we hope to discuss broader policy and execution-related issues faced in feeding Pakistan.

The discussion will be moderated by Robert Paarlberg, Adjunct  Professor of Public Policy at the Harvard Kennedy School. Next Entries »
VIEW ALL EVENTS