We often think of martial law being deployed upon suspension of municipal law in the context of urban civil unrest. Raman draws on East India Company archives from the Madras and Bengal Presidencies to argue that in India between the seventeenth and nineteenth centuries, martial law is deployed in largely unsettled, jungle-infested frontier lands in contexts in which municipal law is absent. At stake in this use of martial law is the ability of the British East India Company – then a corporate sovereign power – to designate certain inhabitants as “rebellious” in order to justify the acquisition of their land and resources.

Raman’s discussion of martial law takes us beyond its immediate economic repercussions to its long-term effects. Martial law is used in this context with the specific intent of restricting free trade and expanding the agrarian resources of a trading company – all in the name of security and protection. Examples drawn from this context, Raman argues compellingly, will contribute to current conversations about the aims and effects of emergency law in various international contexts. 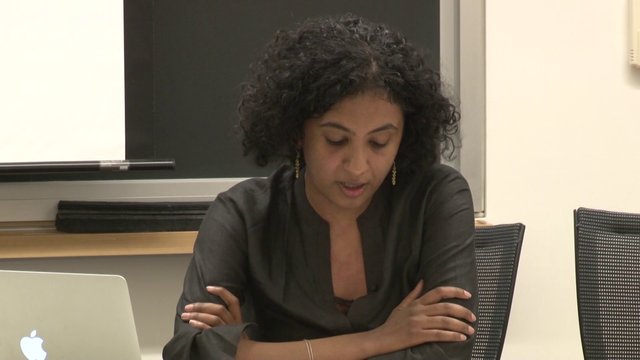 Democracy in India: Past Present Future

On May 8, the South Asia Institute at Harvard University (SAI) and the Central Square Foundation (CSF) convened a group of high-level stakeholders for a roundtable discussion to shape and commit on the agenda for forging linkages between education reformers in the US and in India focused on improving learning outcomes for children. The program was part of a multi-year effort to strengthen the linkages between education reformers in both the US, India and other countries working to improve educational outcomes at a systemic level. Entrepreneurs who are working at the community level, private philanthropists funding innovation and research and the academics performing this research met to establish a framework for learning and building innovative structures. A central tension in our discussions was: how to achieve excellent learning outcomes at a level of scale that impacts millions of children; how do we balance “excellence” with the pressing need “to scale”?

An Overview of India’s Educational Landscape

India’s educational system is failing its children, and the implications for economic development are significant. In the past ten years Government of India spending on education has grown and the results are discouraging; while enrollment levels have improved, students’ learning outcomes are dismal. What are the structural changes that might improve learning in both the public sponsored schools and the private sector ones? How do we frame and sequence the social investment to accomplish this?

What evidence do we have, and what evidence do we need to generate to inform the design and content of this social investment strategy. Educators in India have worked on many levels and across many frontiers to promote improved learning outcomes. Non – profit service providers and philanthropic groups have developed a myriad of interventions; what works and what doesn’t? Looking ahead, where do we need to place our investments to generate the insights and findings that will influence policy makers? Are there important lessons from outside of India that can be applied?

What Are the Critical Questions We Can Discern from the US Education Reform Movement?

The education reform movements outside of India have taken different directions and each offers some insight to efforts in India. The US offers many such important lessons for the emerging education reform movement in India. As we consider the past 20 years here in the US, can we apply “lessons learned” to the Indian context? What are the critical questions that we should pursue?:

What is more important “excellence” or “scale” in program? What is the best application of philanthropic capital: research, pilot stage intervention or scaling programs with promise? How do you support advocacy efforts? If you could restart education reform in the US with 20 years of perspective, what would you do differently?

Join internationally acclaimed filmmaker Sooni Taraporevala for a screening of her film and Q&A afterwards, as part of an ongoing exhibit at the Carpenter Center for the Visual Arts of her photography, Parsis: The Zoroastrians of India (Oct. 25 – Dec. 20).

Little Zizou is a comedy for all ages. It is the rambunctious and moving story of how two battling Bombay families finally come to terms. In the spirit of Federico Fellini, with just a hint of Mel Brooks, Little Zizou presents characters who show us the necessity of love and the possibility of grace. This excerpt taken from movie’s official website; read more here.

This event is cosponsored with the Carpenter Center for the Visual Arts, with generous support from the Tata Group.

This conference will be the first step in convening a group of stakeholders from the public and private sectors, the academy, service providers and NGOs. The meeting will provide an opportunity for information exchange and discussion across a range of issues – legislative, educational, policy and service oriented – relevant to sexual assault and gender violence in India and, more generally, South Asia.

Techno-nationalism in the Rise of China and India

Andrew Kennedy, Senior Lecturer at the Crawford School of Public Policy at the Australian National University

The pursuit of advanced technologies has been a persistent preoccupation of Chinese and Indian leaders in the modern era. Under Mao Zedong and Jawaharlal Nehru, both countries invested in nationalistic efforts to boost indigenous capabilities, hoping to reduce their countries’ dependence on the outside world. The past decade, however, has seen China and India adopt strikingly different technology policies. Whereas nationalist impulses are resurgent in China, India has been called an “interdependent innovator.” Andrew Kennedy will explore these different approaches and their implications for China and India’s rising power.

Andrew Kennedy is senior lecturer at the Crawford School of Public Policy at the Australian National University. His research focuses on international politics in Asia, with particular interest in Chinese and Indian foreign policy. Andrew Kennedy received his PhD in 2007 from Harvard University’s Department of Government. He also holds a Master of Law and Diplomacy from the Fletcher School at Tufts University.

Cosponsored with the Harvard Fairbanks Center

Citizenship and Its Discontents explores a century of contestations over citizenship from the colonial period to the present, analyzing evolving conceptions of citizenship as legal status, as rights, and as identity. The early optimism that a new India could be fashioned out of an unequal and diverse society led to a formally inclusive legal membership, an impulse to social and economic rights, and group-differentiated citizenship. Today, these policies to create a civic community of equals are losing support in a climate of social intolerance and weak solidarity. Once seen by Western political scientists as an anomaly, India today is a site where every major theoretical debate about citizenship is being enacted in practice, and one that no global discussion of the subject can afford to ignore.

A tear-jerking neorealist tale in the mold of Vittorio De Sica’s Shoeshine, Boot Polish follows an orphaned brother and sister who are forced by their horrid aunt to beg on the streets, until their lives are torn apart by the monsoon.