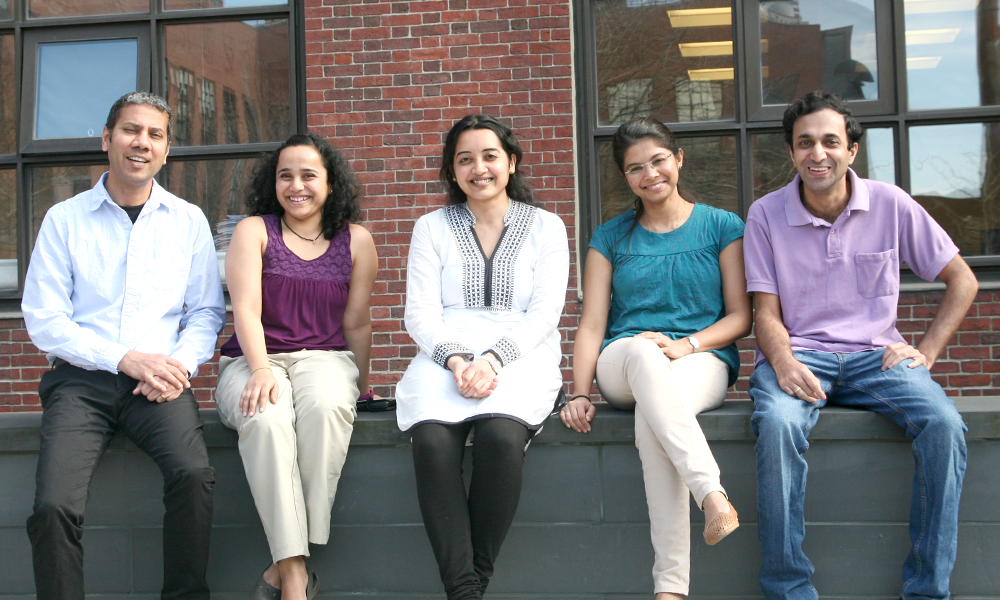 One year ago when Parvathi Sreekumar earned her PhD in Crop Physiology at the University of Agricultural Sciences in Bangalore, India, she never would have guessed that today she’d be halfway around the world, learning computational biology and bioinformatics to study bacteria in Philippe Cluzel’s lab. Yet here she is in Cambridge, along with three other research fellows from Bangalore who were awarded the inaugural Boston Bangalore Biosciences Beginnings (B4) Fellowship, co-sponsored by the South Asia Institute (SAI) at Harvard University, Harvard Global Research Support Centre India, and the Institute for Bioinformatics and Applied Biotechnology (IBAB) in Bangalore. The four fellows, selected from over 52 applicants, earned their PhDs in different fields from different institutes in India, but all now share the unique experience of spending 11 months pursuing research in a completely new direction at Harvard. “Being part of this fellowship is broadening my research exposure and equipping me with new skills that I can go home and implement in India. I’m grateful that students from diverse fields are being given an opportunity like this,” says Sreekumar.

Each B4 fellow is matched with a lab at Harvard that focuses on a research topic within the biosciences, including Systems and Synthetic Biology, Neuroscience, Genomics and Bioinformatics, Soft Robotics, and Biomedical Engineering. For Ramya Purkanti, who studied evolutionary cell biology in yeast for her PhD, Michael Desai’s lab was a perfect fit. “Michael’s lab is also studying evolution using yeast, but they’re asking very different questions,” she says. “My PhD investigated the development of organelles within eukaryotic cells, and now I’m researching the development of sexual reproduction – why did sex evolve when it’s so costly to find mates, and only half of an organism’s DNA gets passed down? The way this lab asks scientific questions, designs and sets up experiments, mines the data, and interprets results is very sophisticated, and I’m really enjoying learning it.”

Aside from the challenging task of getting up to speed on their host labs’ research while simultaneously moving their own projects forward, the B4 program has no official requirement of the fellows. That freedom to explore an environment that’s as brimming with academic activity as Harvard’s has proven to be almost as valuable as the time the fellows spend in lab. “The fact that I get to work on what I’m interested in without extra limitations or requirements sounded too good to be true,” says Praveen Anand, a fellow working in Sean Eddy’s lab. “This fellowship gives me a perfect opportunity to network and learn directly from people who are already well renowned in their fields. I have also started to attend the LS50 course to brush up on my statistics, and found it amazing.” Purkanti agrees: “Something that really struck me was a lecture I attended about a new photosynthetic bacterium, because the lecturer presented her science in jargon-free English and put it in the global context, so that everyone in the audience could understand. Now I want to learn how to speak about my own science in a similarly fluid, ‘normal’ English, too.”

The B4 Fellowship is the brainchild of MCB professor Venkatesh Murthy and Harvard Business School professor Tarun Khanna (who is also the Director of the Harvard South Asia Institute). It represents just one part of the larger B4 program, whose overall goal is to connect research institutions in Boston and Bangalore to promote innovation and entrepreneurship in the biosciences, with the key point being to “Invest In People” to grow the sector for societal benefits. All four B4 fellows agree that it is definitely living up to its stated purpose. “The opportunity to nurture and shape our scientific temperament at one of the best institutes in the world is unparalleled,” says Gayatri Ramakrishnan, who is working with Martha Bulyk at Harvard Medical School. “This program is of immense help and provides a much-needed boost to graduates like us who are in the early stages of their academic careers.” “It was really good at this stage to push myself and learn new things,” adds Sreekumar. “I might not have had the impetus to try something new if I had stayed at my home institution.” Her host advisor, Philippe Cluzel, says, “I see the B4 program as a great opportunity to bring together people with different scientific backgrounds and ask them to work on a problem they could not have tackled otherwise. It has been a really great experience to have Parvathi among us, and I am sure we will keep in touch once she is back in India.”

The one thing the fellows would change about the program (aside from the static in Boston’s dry winter air that makes their hair stand on end)? Make it longer. “I wish I had arrived here earlier, maybe as an undergraduate or as an intern, as I would have had the privilege to explore, experiment and learn as much as possible,” laments Ramakrishnan. “It would be very useful to have at least two years to gain this experience and contribute even more positively to the growth of research and technology back in India,” adds Anand. “We aspire to expand the duration as well as the number of fellows in the coming years”, says Murthy. “We hope that these fellows will take their experiences back to India and influence the system in small, but significant ways – even though the actual period of time they are here is quite brief.”

The B4 Fellowship complements the B4 Young Scientist Development Course, which took place in Bangalore in January, 2017. Read about that program here.

by Lindsay Brownell for the Department of Molecular and Cellular Biology, Harvard University
Source