By Burhan Rasool, Member, Prime Minister’s Task Force on Austerity & Restructuring Government and General Manager, Punjab IT Board; and Ammar Malik, Director of EPoD Research, Harvard Kennedy School One of the natural and obvious outcomes of adopting IT in any...

Podcast: Dadabhai Naoroji and the Birth of Indian Nationalism In this podcast, the panelists explore how Dadabhai Naoroji developed the idea of swaraj, or Indian self-government, during his political and nationalist career, which included groundbreaking economic research on Indian poverty, engagement with emancipatory movements around the world, and becoming the first-ever Asian elected to the British Parliament. Naoroji’s swaraj was global in nature. It evolved from contact with European liberalism and socialism and, at the same time, had a significant influence on the growth of global anti-colonialism and antiracism.

Manjari Miller: The Complexities of the China-India Relationship The China-India relationship is one of the keys to international security, the future of Asia, and the well-being of nearly 3 billion people, and recent border tensions between the two powers perpetuate the potential for conflict. But while these small clashes continue, the two countries have also built a system of cooperation to manage their conflict and larger rivalry. We spoke with Professor Miller to learn more about the China-India relationship, the opportunities to manage conflict, and the steps forward.

On August 15, Prime Minister Modi will announce India’s National Digital Health Mission — underpinned by the Personal Health Record design that was proposed by India Digital Health Network (IDHN) collaborators at a Radcliffe Seminar in 2016. IDHN is a Harvard-wide research and policy collaborative that works with public and private sector partners in India to advance meaningful health data exchange with the intent to improve clinical care and population health.

What Is the Future of Higher Education’s Internationalization? Recently, the internationalization of higher education has been deeply impacted by the twin forces of the COVID-19 pandemic and international politics. While resurgent nationalism and xenophobia around the world had already cast doubts on the importance of a globalized system of higher education, the pandemic has only added to the conundrum by imposing restrictions to the normal movement of people within and between the world’s universities.

An Infrastructural Revolution Along the Indo-China Border By Raile Rocky Ziipao. In the light of the Indo-China face-off in Ladakh that led to the deaths of 20 Indian soldiers along the Line of Actual Control (LAC) at Galwan Valley, there is now an acute urgency to focus on border infrastructure. From a policy perspective, India needs an infrastructural revolution at its borders for national security, to fortify against external threats, to bring connectivity to unconnected territory, and to maintain peace and prosperity. 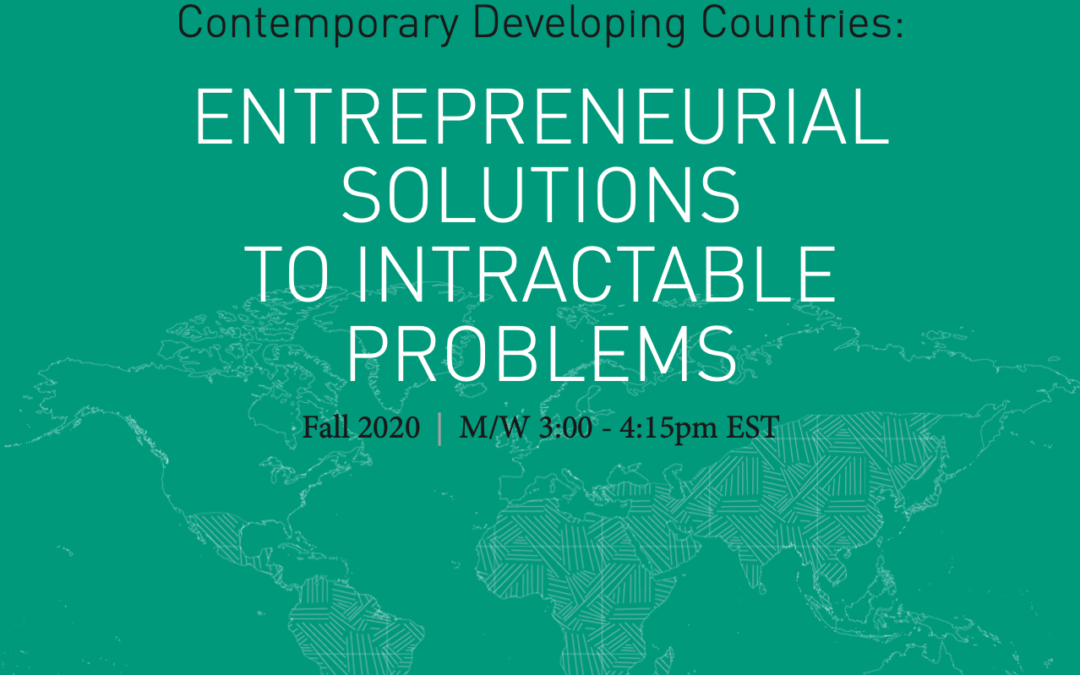 Over 5 billion people living in developing nations face seemingly insurmountable institutional voids that the entrepreneur must overcome to be successful. Contemporary Developing Countries: Entrepreneurial Solutions to Intractable Problems teaches you to apply interdisciplinary tools to address challenges ranging from limited access to education and health, lack of water, sanitation and uncontaminated food, lack of financial services, deep-seated corruption, and now, the raging pandemic. Spring 2020 Visiting Artist Fellow Numair Abbasi is a Pakistani artist whose practice draws on popular culture and anecdotes to challenge how gender is socially constructed and performed. In this video, he discusses the work behind his virtual exhibition, Everyday Encounters, with the Harvard Ed Portal.

Podcast: Rethinking the Museum Experience During and Post-COVID-19 A recent panel discussion at the Mittal Institute, “Rethinking the Museum Experience During and Post-COVID-19″ — moderated by Jinah Kim, George P. Bickford Professor of Indian and South Asian Art at Harvard University — explores how art institutions can remain nimble enough to respond to uncertainties, such as COVID-19, adapting their approach to tackle similar situations in the future. How can art institutions engage their patrons as partners in the sustainability of museums? Veronica Vargas, PhD, is an economist who focuses on health economics, global health, and health policy. As a research affiliate with the Mittal Institute and visiting scholar at Harvard University for the past three years, she has explored the research and development (R&D) of novel vaccines and drugs in both South Asia and Latin America. More than ever, this expertise has become essential in the understanding of global needs for R&D in the face of a pandemic and additional neglected diseases around the world.

Video: Dadabhai Naoroji and the Birth of Indian Nationalism

The Mittal Institute’s recent panel webinar, “Swaraj: Dadabhai Naoroji and the Birth of Indian Nationalism,” was moderated by Sven Beckert, Laird Bell Professor of History at Harvard University, in discussion with Dinyar Patel, Assistant Professor at S.P. Jain Institute of Management and Research.

Hasna Moudud: Oriental Winds of Change and the Silk Road to South Asia We spoke with Hasna Jasimuddin Moudud, a Research Affiliate at the Mittal Institute and the author of numerous books, including “Where Women Rule: South Asia,” and “Mystic Poetry of Bangladesh.” For decades, she has journeyed the Silk Road to learn more about the connections and exchanges of goods, ideologies, and knowledge across centuries and continents, and shared with us some of her discoveries along the way.