Update from the field: Lucknow: The Land of Many Cultures Seeing the work by tribal artisans at Shilp Sadhana

From the western states of Maharashtra and Gujarat, the SAI Team culminated its field visits in North India. The first destination was Lucknow, the capital city of the Indian State of Uttar Pradesh. The second largest city of North, East and Central India (after Delhi), Lucknow is known for its Ganga-Jamuni Tehzeeb (culture of respect for all religions) having been the seat of the Nawab power in the 18th and 19th centuries. Historically, it is said to be a part of Awadh, the land ruled by Lord Rama from the epic Ramayana. The name Lucknow is said to be connected with his brother Lakshmana. During the Nawab Rule, Lucknow became India’s cultural capital, since its Nawabs were patrons of arts.

Among the many arts that Lucknow is known for, Chikankari is the popular embroidery work much in demand in India and other parts of the world. A 400 year-old form of embroidery, Chikankari is practiced primarily in this part of India. It earned the GI (Geographical Indication) for Lucknowi Chikankari in December 2008. A very delicate and artistic embroidery done using white thread on white and coloured cloths including cotton and chiffon, the Chikan artwork is popular among men and women. It is used in Kurtas and Jackets for men; and in Saris, Salwars, Shawls, Scarfs and Exquisite Dupattas for women.

To study the issues and challenges connected with this art form, we visited three organizations in Lucknow. The first one was Shilp Sadhana. Over two hours of discussion with Pankaj Arya, a second generation leader of the Chikankari work and artisans, we learned a lot from him about its evolution and the state of the artisans associated with it. Shilp Sadhana started in 1984 to revive the hand block textile printing craft of Lucknow, and transitioned to Chikankari and other craft forms later. Given its financial benefits and popularity, Chikankari dethroned the art of block printing. 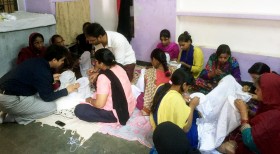 Understanding the work at Thread Craft

The Shilp Sadhana Model aims to empower the artisans – both in the urban areas and rural areas. The biggest problem with this craft is that 98 percent of the artwork is done by women. A majority of these artisans belong to the minority community, primarily Muslims. Given their family restrictions and inability to move out of the house and reach the markets to get a good price for their work, the middlemen began to play a major role. As a result, over the decades, the middlemen continued to prosper and the artisans continued to languish with monthly earnings as low as INR 600 (USD 10). Shilp Sadhana’s main objective was to empower the artisans. Its model removed the contractor (middleman), which helped increase earnings for artisans. Consequently, the earnings and empowerment of artisans associated with the organization has been constantly improving.

Shilp Sadhana uses grants from the Government of India for capacity building and training of artisans. It has received notable success in improving the quality of work of the artisans, as well as the kind of designs and variety in their work to suit the changing market requirements. Pankaj pointed out that one of the problems with the industry structure was that minimum wages are applicable only where there is a Maximum Retail Price (MRP). If this is applied to the Lucknowi Chikan work, the products would become unaffordable. Hence, removing the middlemen and empowering the artisans to connect directly with the customers and retail shops is a desirable way to improve their monthly earnings and continue the demand for Chikankari products. Challenges faced by this craft includes sustainability, limited access to markets and inputs, manpower issues, and availability of funds. 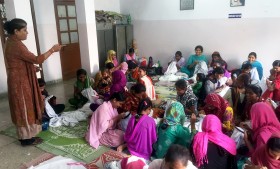 Runa Banerjee interacting with her artisans

The next visit was to a start-up called Thread Craft India by Mohit Verma. An alum of the Tata Institute of Social Sciences (TISS), Mohit has experience working in the IT sector. However, he gave up a lucrative career and started Thread Craft. Having been born and brought up in Lucknow, Mohit wanted to bring about a change in the situation of the Lucknowi artisans.

During the visit, Mohit highlighted similar problems in this sector: very low income levels where maximum value is added by the artisans, a situation where they are the least valued aspect of the chain. Thread Craft’s objective is to make women self-reliant and eventually form Self Help Groups that are self-sufficient. The biggest requirement for that is motivation. Coming from very humble backgrounds, the women need a lot of support to scale up and grow into an entity. As of now, Thread Craft makes products for exporters in the USA and countries in Europe. The orders are taken and Thread Craft works with its team of about 50 artisans to deliver within the allotted time. The interaction with exporters comes through participation in exhibitions. Mohit also ensures that year-on-year the artisans are given a rise in their earnings. Having started at INR 2,000 per month in 2013, the artisans have nearly doubled their monthly income to INR 4,000 in a matter of three years.

After visiting a start-up organization, we visited an industry veteran: SEWA (Self-Employed Women’s Association). Runa Banerjee, General Secretary and Chief Executive Office of SEWA Lucknow, is a recipient of the Padma Shri Award from the President of India, Dr. Abdul Kalam, for her outstanding contribution to the artisans of Lucknowi Chikankari. Runa was also nominated for the Nobel Peace Prize in 2005. Her humility and simplicity belied the quantum of work she had done to change the lives of over 50,000 Lucknowi Chikan artisans over the previous three decades. She personally shared her journey with us, that started from a small room and 30 women artisans to the present situation where SEWA has its own building and supports over 7,500 artisans with regular work. Currently, SEWA possesses end-to-end business experience – from purchase of cloth, to design, embroidery, quality management, and sale either through the women artisans or the SEWA sales team. Her team escorted me to the different sections in the building where designing, thread work, embroidery and quality control was done by the women. She herself came to certain sections and explained the subtle nuances of shadow work in Lucknowi Chikan art. I was also able to see samples from their most recent exhibition in Mumbai and even purchased a nice Kurta as a gift for a friend! SEWA is known across India, especially in Mumbai and Delhi, for its annual exhibitions. From industrialists to cinema stars to office goers and common citizenry, all visit these exhibitions and pick their choice of Lucknowi Chikan work. Over the years, the SEWA Exhibition has become an annual feature in these cities. SEWA’s products are in demand in the USA, Australia, and Europe as well.

Runa shared that association with SEWA has made rural women in and around Lucknow increasingly entrepreneurial. It has helped increase household wages and empower women both socially and economically. But this journey has not been without challenges, the biggest being the availability of working capital for purchasing raw materials and high quality cloth. However, her inspiration has been the support she has received from her well-wishers. She fondly remembered her interactions with the Former President Abdul Kalam, who always appreciated her contribution and encouraged her to continue this never-ending journey of empowering artisans and improving the art form.

And so continued our journey to the last destination in our field visits – New Delhi – the capital of India and an amalgam of cultures and crafts. So wait till next week when we bring you the final blog in this series on the New Delhi potpourri…