Student voices: The politics of contemporary women’s rights in Myanmar Kate spent part of her summer conducting research in Myanmar on her thesis ‘The Politics of Contemporary Women’s Rights in Myanmar: The Paradoxical Case of Aung San Suu Kyi.’

With the SAI Summer Research Grant, I was able to spend the past few months in Myanmar conducting research for my senior thesis. I would like to thank SAI for allowing me to pursue this research project as the experience of living and researching abroad was extremely meaningful. Not only am I now much more knowledgeable on a subject I am passionate about, but it provided me with further insight into my post-graduation aspirations and ambitions. Overall, the summer was enriching, engaging, challenging, and rewarding and after completing it, I would recommend the experience to any young scholar.

In total, I spent ten weeks in Myanmar. I lived and spent the majority of my time in Yangon, with weekend side trips to Hmawbi, Bagan, and Nay Pyi Taw. After arriving in Myanmar, it took me a few weeks to get settled in. I moved in with my host family and I spent the first few days getting re-acquainted with the city, attending an intensive Burmese language course, and taking fabric to the tailors so I could get some traditional Burmese outfits to later wear to my interviews. I unfortunately faced some difficulties during the settling in process as I got sick and there were some unavoidable delays in my IRB approval. However, despite this three-week delay in starting substantive parts of my research, I was able to complete the necessary steps and actions over the course of my entire stay.

My research on Women in National Level Politics in Current Myanmar took me to multiple political party offices, the country’s capital, and to bustling tea shops which lined the streets. To answer the question of how and to what extent women have been able to participate openly and meaningfully in national politics post the November 2015 election, I interviewed three distinct categories of subjects: Members of Parliament (both male and female), Campaign Managers for the last election in 2015, and average citizens. The combination of the three groups of interviewees provides multiple different perspectives and will hopefully provide strong causal inference for my research conclusions.

In all, I formally interviewed 26 people and had informal conversations with many others. Each interview was different, some were in Burmese (with a translator) and some in English, others in offices or on park benches. For each, I tried to make my interviewees feel most comfortable to speak with me about their experiences and perceptions of female political participation. All of the conversations I had were enlightening and enjoyable, yet my favorites included those with the Director the Human Rights Commission, the President of the Myanmar Women’s Affairs Federation, and the grandmother in my host family. 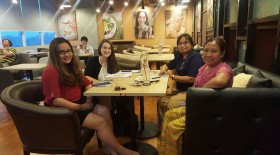 Despite a great deal of background research and preparation heading into the summer, little would have prepared me for the complexities of conducting research in Myanmar. The country’s current state for research is difficult to navigate and there are many barriers to conducting good research: lack of infrastructure, cultural factors, and monsoon weather. Thus, I faced multiple challenges throughout my research including unresponsive potential interviewees, some language barriers, and difficulty in scheduling interview times.

By the end, although I was not able to conduct as many interviews as I had anticipated, I was proud of the quality of the primary data I was able to collect. The lack of infrastructure and the obstacles in my way only made me more determined to conduct my research and provided me with a stronger motivation to do so. With so few scholars having gone down the path of conducting research in Myanmar before me, I had to pave some of my own way, but I am extremely satisfied with the work I did and the experiences I had and I am excited to continue the thesis writing process.